The Just War: Moral and Ethical Considerations in reaching a Decision to go to War 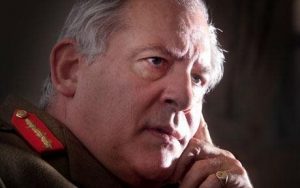 Charles Guthrie joined the Welsh Guards in 1959 and in the 60s served with them and the SAS in the United Kingdom, Germany, Libya, The Middle East, Malaysia and East Africa. He spent 1972 as a student at the Army Staff College and then held a number of appointments in Whitehall and with his Regiment in London, Northern Ireland and Cyprus.

From 1977 to 1980 he commanded the Welsh Guards in Berlin and Northern Ireland. In 1980 he served briefly in the South Pacific and as the Commander British Forces, New Hebrides, recaptured the island of Espirito Santo, which had been seized by insurgents. Apart from holding a number of senior staff appointments, he commanded an Armoured Brigade, an Infantry Division, 1st British Corps, the British Army of the Rhine, and the Northern Army Group before becoming Chief of the General Staff (Head of the Army) in 1994. From 1997 to 2001 he was Chief of the Defence Staff and the Principal Military Adviser to two Prime Ministers and three Secretaries of State for Defence.

He is an independent Member of the House of Lords; and is a Director of N M Rothschild & Sons Limited, Colt Defense Inc and Peter Hambro Mining Plc. He is a Member of the Executive Committee of The International Institute of Strategic Studies; a Visiting Professor and Honorary Fellow of King’s College London University; Chairman of the Trustees of The Liddell Hart Centre for Military Archives; a Board Member of the Moscow School of Politics and Ben Gurion University; a Governor of the Oxford Centre for Hebrew & Jewish Studies; a Consultant to BioDefense and Thorium Power. He is President of The Army Benevolent Fund; Action Medical Research; The Federation of London Youth Clubs; and a Governor of The Charterhouse, Clerkenwell. He is Chairman of the Hospital of St John and St Elizabeth and a member of the Advisory Board at the London School of Hygiene & Tropical Medicine.

A keen sportsman; he played rugby for the Army, regularly rides and plays tennis. He attends the opera as often as he can.

He is married and has two grown up sons.

This gives a 5 minute preview, follow the instructions on the top left of the viewing screen to install the ‘Veoh Viewer” to view the whole video.