From Cold War to Brexit: Reflections on the Changing Face of Diplomacy 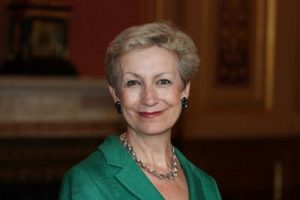 Dame Judith Macgregor was British High Commissioner to South Africa from September 2013 until March 2017, when she retired from the Foreign and Commonwealth Office after a career of some 40 years.

After graduating from Oxford (Lady Margaret Hall) with a first class degree in Modern History, Dame Judith entered the Foreign and Commonwealth Office in 1976 serving first in the former Yugoslavia, and later as First Secretary in Prague and Paris.

Dame Judith was President of the FCO Women’s Association from 2006 to 2016 overseeing a significant increase of women in the senior grades.  In Mexico and South Africa she led government efforts to increase bilateral trade and investment.  Dame Judith also spearheaded work to increase bilateral Research and Development Programmes and extend post graduate scholarships, professional and educational exchanges for young people.

Since 2017, Dame Judith has become an Independent Non Executive Board Member of the UK/Mexican mining company, Fresnillo plc and Lay Member of the Council of Southampton University.  Dame Judith was elected Honorary Bencher of the Middle Temple and Honorary Fellow and member of the Advisory Council of Lady Margaret Hall, Oxford in July 2017 and she became a Deputy Lieutenant for Hampshire in December 2017.  In March 2018 she was appointed to the new Arts and Humanities Research Council under UK Research and Innovation.

Dame Judith has four children and her husband John is a Visiting Professor at Christchurch Canterbury University and Chair of Orbis Africa, a not for profit organisation working globally to prevent eye disease.